After spending 1,5 days in Kunming I was ready to leave. I took the overnight train to Dali – a 350 km journey. The train left at 10pm and was supposed to arrive in Dali at 5:30am – what a great time to arrive in a city you have never been to. I actually like taking trains in China – well, I mean sleeper trains – not sure any longer about the standing ticket I ended up with 3 years ago – but that is another story. So, sleeper trains are actually quite comfortable and not too expensive. The trip to Dali cost me about 15 EUR and I even had a bed and a duvet – OK, I could not sit up straight but who cares if you can lie down – it was just a bit difficult to drink a beer lying on my back – try it! Obviously, I immediately made some new friends who wanted to practise their English. I did however not sleep very well because it was a) quite noisy (remember my nights in Spain?) and b) the train seemed to stop every 10 minutes and c) at some point I was getting really worried about missing my stop. 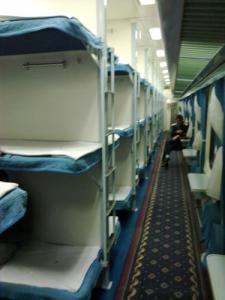 Dali is at an altitude of 1900m with a backdrop of the 4000 m tall Cang Shan (Green Mountains). It also lies on the Western edge of the Erhai Hu lake (Ear-Shaped Lake) which is the seventh biggest freshwater lake in China. The main inhabitants of the region are the Bai, who number about 1,5 million.

That’s Erhai Hu seen from a cable car on the way up to Cang Shan (I was lazy and took the cable car up). Up there there were not too many people and besides some random Chinese tourist attractions (like a huge mahjong board game) there was a nice walking trail.

I also found this interesting rubbish bin, where you can dispose of your organism 😉

What Dali is also known for is being VERY touristy. While the old town is still beautiful it is just swamped with Chinese tourists (especially around a public holiday) and shops which are more or less all selling the same things – not my cup of tea really.

The city has 4 impressive city gates facing north, south, east and west. The city wall has partly vanished, only the north and south wall were restored.

However, as in every place, it is possible to find some quieter and less frequented spots. I came across this local market, which was not touristy at all.

Another interesting place to visit was the Catholic church which was built in 1927. I was surprised to find a red altar crucifix in there… something I have never seen in the Western world. I wonder if this has something to do with Communism as well?! 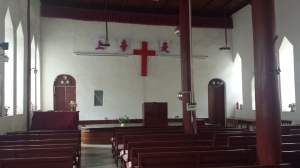 What I really loved about the old town where the beautiful Bai style houses with their gorgeous coloured drawings.

The lady in my hostel (by the way, I was staying in an amazing hostel. It is surprising to hear but from my experience China has some of the best hostels I have ever stayed in. The one in Dali had a beautiful garden, a little pond, super cozy rooms and it only cost around 7 EUR a night – WOW) recommended to rent a bike and cycle around Erhai Hu. I was actually surprised that when I asked for a bike they presented me with a full suspension mountain bike – I had expected a cheap crappy bike – but wow, this was actually a nice bike. So off I went.

Naturally, I got lost immediately. The lady in the hostel had told me that there was a well established cycle path around the lake AND that all the signs were in English. When I arrived at the lake, there were no signs and DEFINITELY no signs in English… so I cycled around town for some time, got a little frustrated before I finally saw some other cyclists and, yes, there was a cycle path and yes, the signs were kind of in English as well – sometimes at least :). What did I learn? Patience! The right path is usually not far…Actually, I have already learnt this lesson many times – but sometimes we need to learn a lesson twice, 3 times, a 100 times before we actually change our behaviour – sometimes we never learn the lesson, but I do hope I will learn this one at some point…

It was a beautiful route around the lake. The weather was lovely (I burnt the back of my hands badly) and there were hardly any people out there. 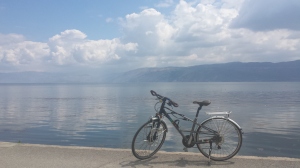 The scenery was stunning. On the one side there were the mountains, villages, farmers working in the fields and on the other side there was the huge lake. 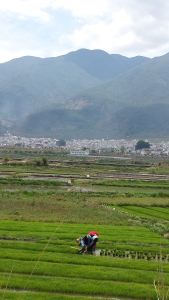 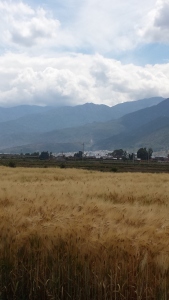 Interesting to watch were also the farmers cultivating their lands/ paddy fields. While rural and urban life also differs in the Western world the difference is even more profound in China

After cycling for a few hours the cycle path ended. I continued cycling on dirt tracks because I enjoyed it so much that I did not want to turn around but as it was getting quite late I had to. I guess cycling around the whole lake would probably take 2-3 days.

So I returned to the hostel, had a lovely noodle soup for 10 RMB for dinner… the only English words the laoban (boss) spoke were beef noodle – so he was quite happy when I ordered exactly that.. ahhh, beef noodle… yes, that is what foreigners want and after dinner I went to bed rather early where I was kept awake by what it seemed a very enthusiastic but not very skilled karaoke singer…

The next morning I continued my journey further north to Shangri – La which is already Tibetan territory….