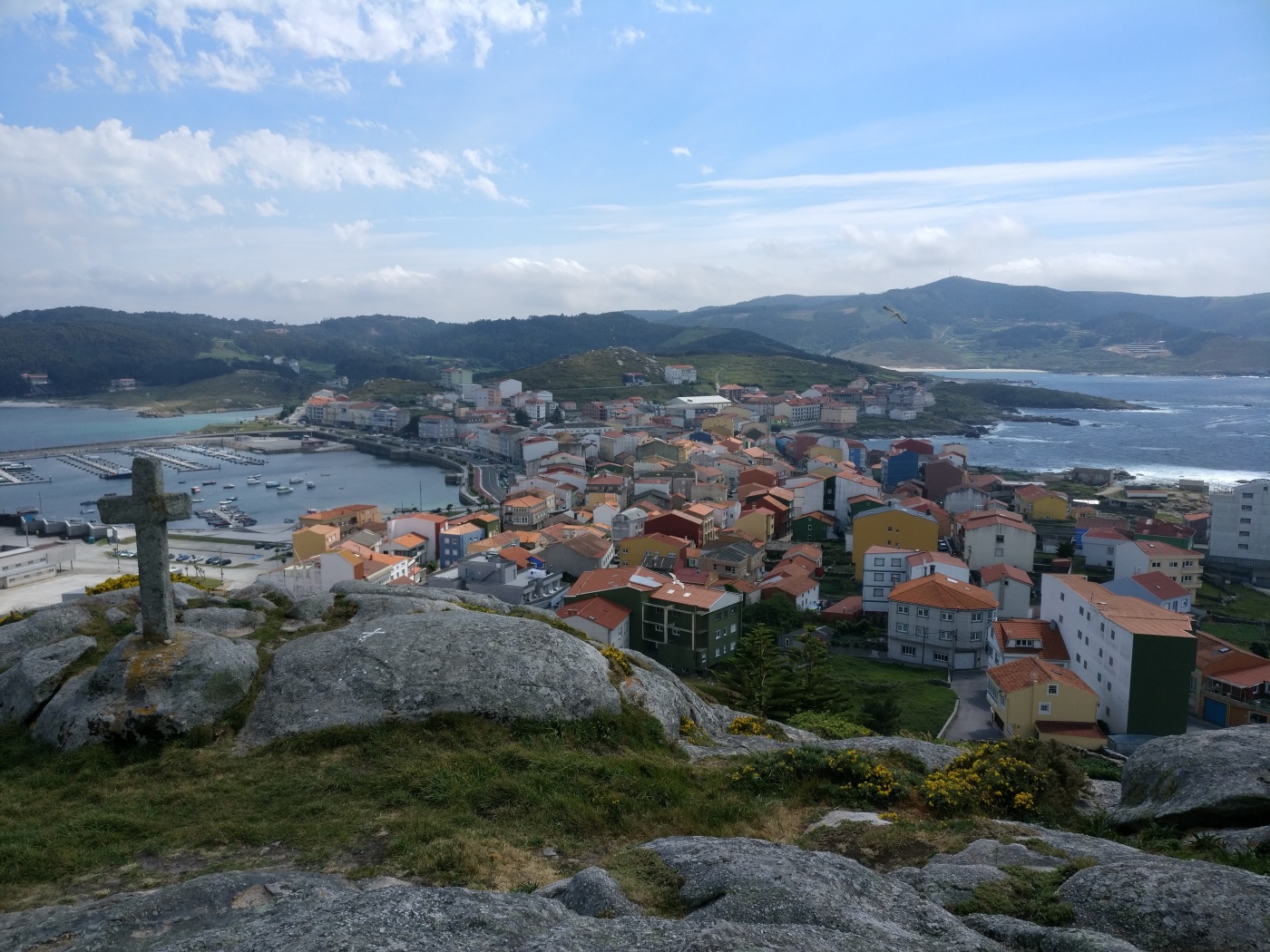 And then I was ready for the last leg of my journey. The Camino Finisterre – which would lead me to the coast.

I left the hostel in Santiago rather late that morning. The Camino arrows were (as always) easy to spot. Shortly after I arrived in the outskirts of Santiago I came across the first signpost, which confirmed I was on the right way to Muxia/Finisterre (approx 90km). I still was not entirely sure whether I wanted to walk to Muxia or Finisterre. Finisterre is the more popular destination for most pilgrims, hence, also more touristy.  In Roman times it was believed to be the end of the known world – which obviously it is not. Muxia is a seaside town and a bit less touristy than Finisterre. 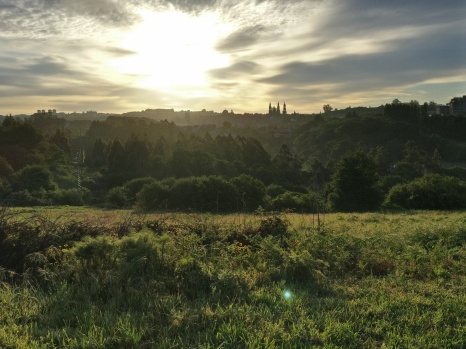 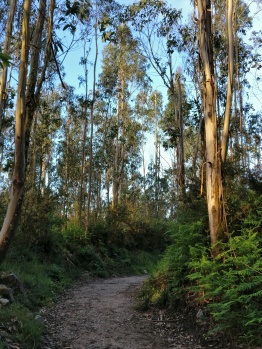 The walk was beautiful and after the extremely crowded Camino days from Sarria to Santiago I was very surprised (and at the same time extremely relieved) that I hardly saw any other people on the Camino that day. The whole day I only saw five or six other pilgrims. On the other hand the pilgrims I met now had all walked different Caminos. All Caminos lead to Santiago hence, I met people who had walked the Camino Portuguese, the Camino del Norte or whatever other Camino there is and it was very interesting to listen to their Camino stories and experiences. 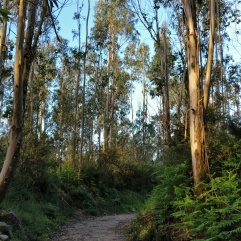 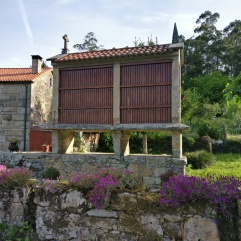 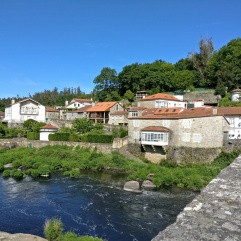 I passed some beautiful villages, lush green forests and meadows and it was overall just very peaceful – and very hot, but thankfully there was a lot of shade on the Camino that day. Around 1:30pm I reached the small town of Neigreira where I stopped for some refreshments. The bar owner was surprised when I asked for a bottle of coke and a bottle of water at the same time – I was sooo thirsty.

After I regained my strength I continued walking. Right after I left Neigreira there was another signpost. Now the Camino split. The actual Camino was shorter but followed the main road while the alternative route was a bit longer and apparently much nicer. Hence, I decided to follow the alternative route. And it was really nice. The Camino followed a stream and crossed some beautiful parklands. At some point though, while walking through some bushland, I could not find the signs anymore. I followed several dirt roads but no, it seemed that all the signs had disappeared, While the remoteness and lack of people had made me extremely happy in the morning all I wanted now was someone to help me find the way. That’s how quickly the reason for happiness can shift. The thing that makes you happy in one moment might be exactly the same thing that causes you a lot of trouble in the very next ;). I did eventually find the yellow arrow (which had been there the whole time) but I had to go through a few brief moments of frustration and a few extra kilometres (as can be witnessed in my video ;)).

And something else had changed. Whereas on the Camino Frances there was an albergue in every village and a water fountain every few kilometres here you really had to plan ahead. You often walked for miles without opportunities to fill up your water bottle.

When I finally arrived at the albergue I had walked for almost 40km (the longest during my whole trip). One of the reasons for walking such a long distance surely was that there were just not many albergues on the way but also that the weather forecast predicted heavy rain in 3 days time – and I wanted to arrive before that prediction became reality. It was already past 6pm and I was exhausted. The albergue – a beautiful little farm – helped me recover quickly though.

We were only a handful of people that night. The owners prepared a delicious pilgrim’s meal for us and we had a nice evening – this time with a completely new crowd of people. Pretty much everyone had walked the same distance in the same heat and by 9pm we were all fast asleep.

When I woke up the next morning at 6:30am my energy level was up again and I was ready for another Camino day. Again, there was hardly anybody on the Camino and it was a beautiful walk. 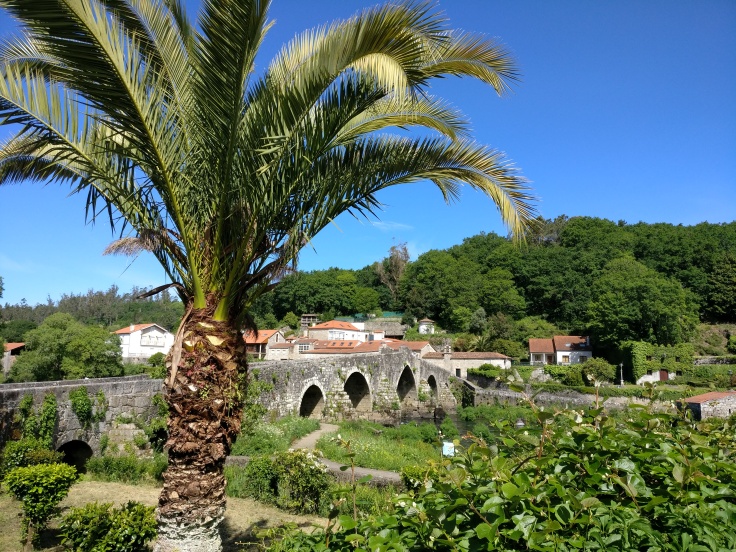 After a few hours of walking I stopped in a little restaurant along the way. I ordered a cheese sandwich and it seemed the owner had no more cheese at home (this is how busy it was – they had not even bothered to buy any cheese ;). . However, right after I ordered I saw him jumping into his car and 5 minutes later he returned with cheese – and I could have my cheese sandwich. 🙂 I took another break a few hours later. Both of my breaks I spent with an Irish man, who had also spent the night in the same albergue. He had recently suffered a heart attack and was now ready to attack life.

That afternoon the Camino split and I finally had to make up my mind – one of my biggest strength – or not. One path led to Finisterre and the other one to Muxia. And I chose Muxia – apparently there were less tourists AND it was a few kilometres closer. Every km counts – sometimes. Especially when you have already walked for hundreds of miles and temperatures hit 30C.

After many more kilometres of walking on paved road (which equalled a lot of pain) I arrived in the town of Dumbria. When I walked into the albergue I was not surprised to see my Irish friend already sitting there. I loved his response when I asked him how his walk that day had been: He simply answered: well, I am fucked (with a heavy Irish accent). After a shower the three of us (another Irish had joined us) set out to explore downtown Dumbria – only to find out that there was not much to explore… We found one bar, which looked rather dodgy from the outside – adjacent to it was the only supermarket in town, which was also run by the people who worked in the bar. So you had to wait until the bartender had finished serving the few people in the bar (and she took her time) before she attended to the customers in the supermarket.  We had a drink or two or three. When the woman behind the bar showed us the pilgrim’s menu we were not entirely convinced of whether we really wanted to have dinner there. So we left, only to return 20 min later – there was just no alternative in town. And it turned out to be quite a nice dinner- who would have thought.

Just before going to bed in the evening I discovered a new blister on my foot – it had been a while. But hey, I was a blister expert now. Within a few minutes the whole business was done, sterile, clean and no infection this time. Yay…

The next morning at 6am I was woken up by loud voices echoing from the corridor. When I left the room I saw a group of people who were busy packing their bags and talking loudly. That was the room my Irish friends was in, so I kind of suspected that he would have had a wonderful night. I have no idea how people can behave like that. My friend later told me that at 5:45 they switched on the light and started packing and talking while he was still sleeping. Just NOT cool.

For breakfast I stopped in a small bar right next to a construction site. Hence, the bar was mainly filled with construction workers and me – the pilgrim. Still, the owner seemed to be happy to welcome me and served me a delicious breakfast (by now my Spanish was good enough to order a cheese sandwich and coffee – yay).

Behind every corner, behind every hill I expected to see the ocean but the Camino dragged on and on. Until I finally did reach the ocean.

From there I walked another 8km on concrete and then I finally reached Muxia! 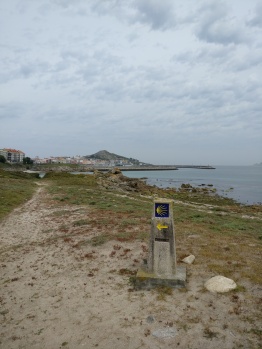 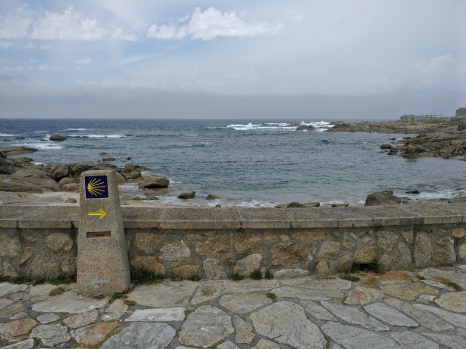 In Muxia I collected a flyer of what looked like a very nice albergue – and that is where I checked in shortly later. After a shower I explored Muxia – a beautiful sea town with a very picturesque cathedral right on the ocean. I sat down on a rock, facing the ocean and  enjoyed the very present moment(s). 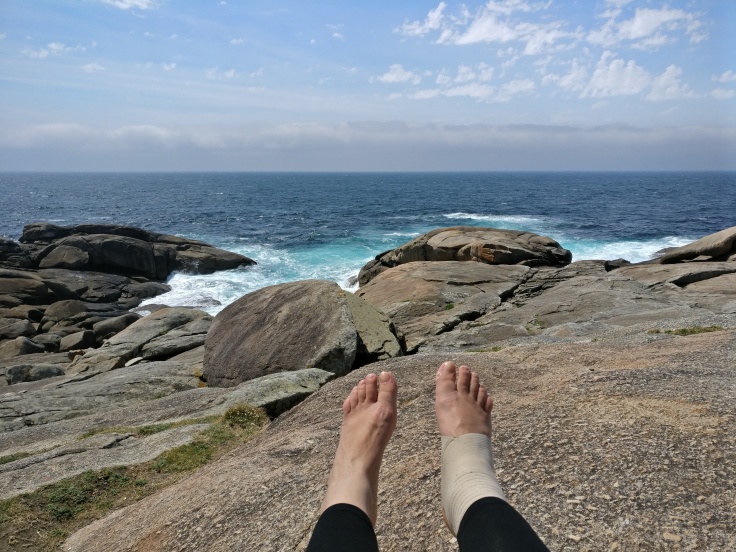 Even though I had thought about walking to Finisterre the next day, I decided right there and then that this would be the end of my Camino. My feet were sore, the weather forecast for the next day said heavy rain and there was a bus from Muxia to Finisterra – and I would be on it. 🙂

I spent a lovely evening with my Irish friend and a few other people having dinner and enjoying this beautiful little fishing village. 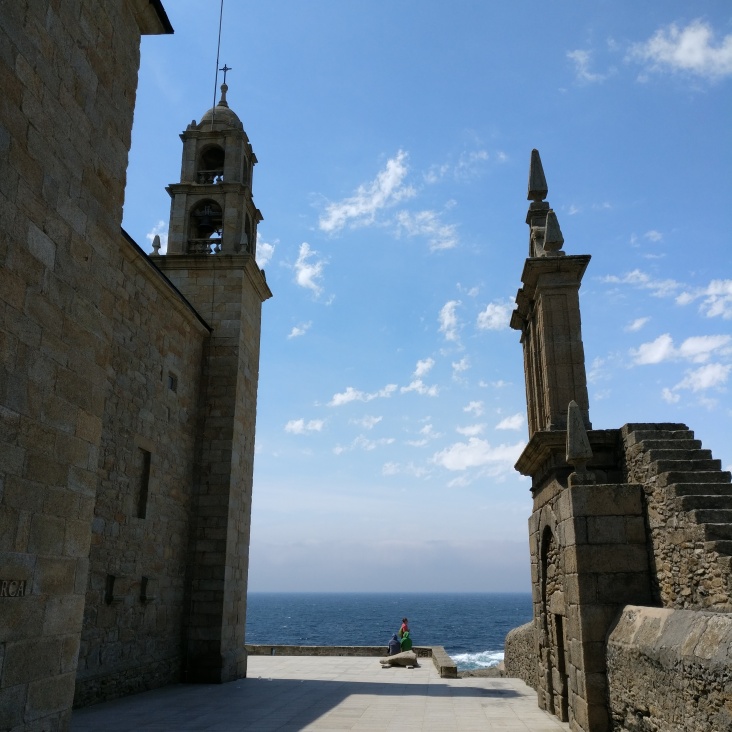 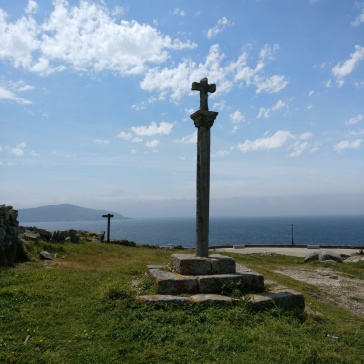 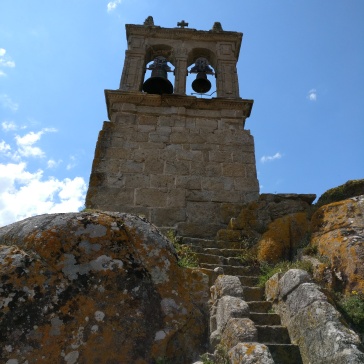 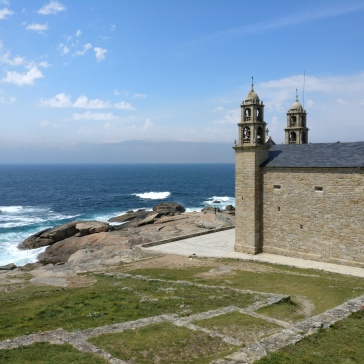 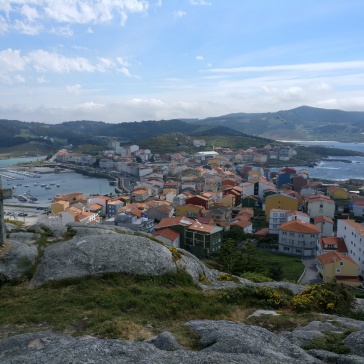 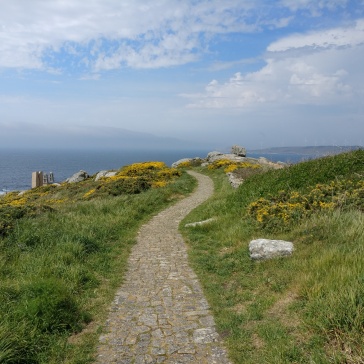 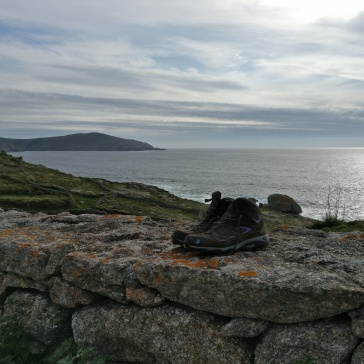 The next morning it simply was pouring it down – and I was extremely happy with my decision to take the bus to Finisterre.

At 1045 the bus left. It was a small bus so all the people behaved in a way people do when they feel supply and demand is not balanced (I guess, you all know what I am talking about). The roads were windy and the bus driver seemed to have a liking for Formula 1 – to summarise: I was extremely happy when the bus stopped and we were being put on a bigger bus. And believe it or not – on that bus there were some people who I had met on the Camino Finisterre a few weeks before. The Camino world is small :).

Despite the horrible weather I spent a wonderful last day in Finisterre in the company of a Camino friend – with lots of food, wine and a walk in heavy rain to the lighthouse – the 0,0km mark. 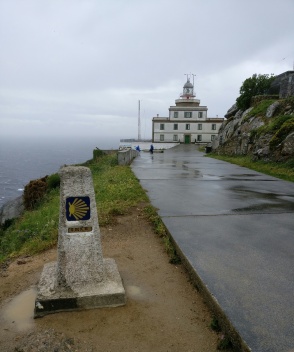 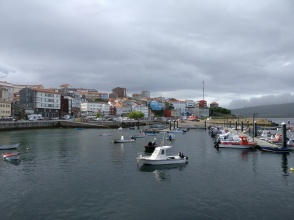 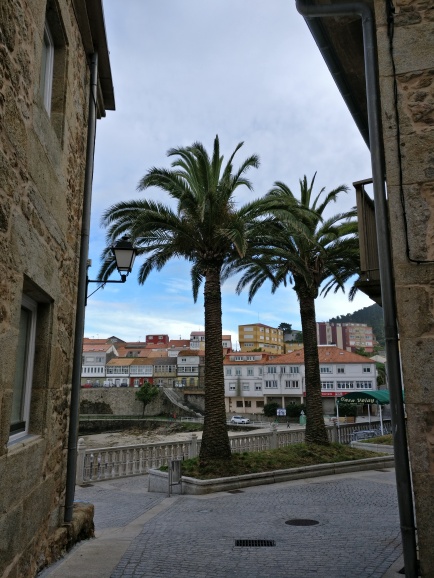 In the evening I went for a walk on the beach to collect some scallop shells and to reflect on this amazing adventure – to express my gratitude for everything I had experienced. 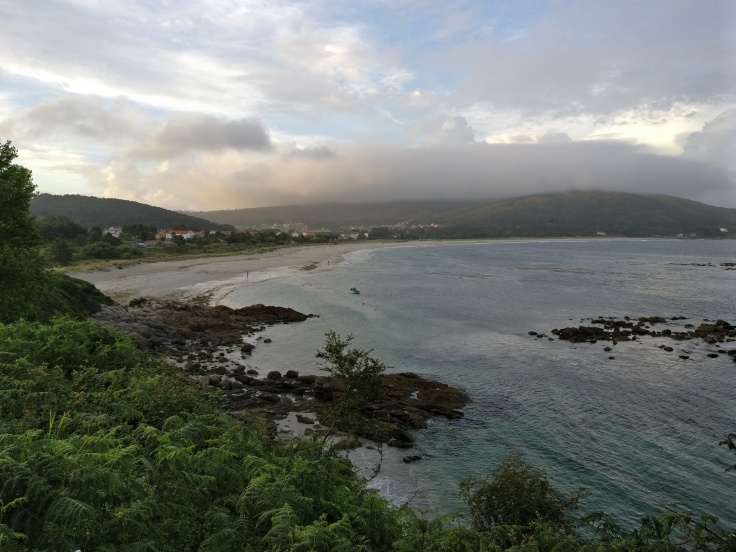 And that is the end of my Camino story.

One more time a little video:

I will write one more blog post summarising my Camino experience – before closing this chapter.